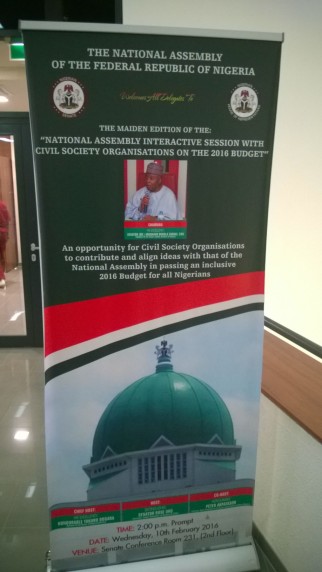 Looking at aspects of the 2016 National Budget[1]

We applaud the leadership of the Nigerian National Assembly (NASS) for convoking a consultation with civil society over the 2016 National budget. This level of engagement points to an era of openness and inclusiveness that will ensure that the voices of the people are heard.

This contribution is restricted to a few aspects of the capital expenditure earmarked for the Petroleum Resources, Power Sector and for the Ministry of Environment. These sectors undergird other areas of our national endeavour and deserve close scrutiny.

We do not wish to get entangled with recurrent expenditure issues as these comprise mostly personnel costs, some of whom may be ghosts!

It is most surprising to see a whopping N200,000,000 proposed for the “Passage of Petroleum Industry Bill (PIB).” We would like to see the detailed breakdown of this sum in order for us to be able to make sense of the proposal.

With the budget still largely predicated on crude oil revenues, an unpredictable and increasingly negative resource, the budgetary provisions here require plenty of questioning. However, it is most surprising to see a whopping N200,000,000 proposed for the “Passage of Petroleum Industry Bill (PIB).” We would like to see the detailed breakdown of this sum in order for us to be able to make sense of the proposal. Which PIB is this provision referring to? The same goes for the proposal to spend N200,000,000 for the “Review of Gas Master Plan.”

We note that the power distribution aspects of the defunct Power Holding Company of Nigeria (PHNC) had been privatised and handed over to companies that have gone ahead to increase electricity tariff before providing commensurate services. The question needs to be asked why there should be a budgetary provision of N397m for purchase of 75 pieces of 500 KVA transformers for Abuja and four States?[2] There are three other lines for procurement and installation of transformers for other locations at N262,414,132, N20,683,949 and N250,401,152. If privatisation means that the distribution sub-sector of the defunct PHCN was taken over by private investors, why is the government still buying and installing transformers?

Another concern is about the N1 billion budgeted for generation of 10MW of electricity at the Katsina Wind Farm. This Wind Farm is on record as having been fully paid for in the past.[3] If this budgetary allocation, broken into two subheads are NEW, as stated, is there a confirmation that the  OLD installation is already working?

A well equipped NOSDRA would be better positioned to independently detect and respond to oil spills rather than depending on the polluting oil companies.

The Federal Ministry of Environment is not one of the best resourced ministries. It, however, is one of the most vital ministries for the fact that most Nigerians depend essentially on the natural environment.

Considering the level of pollution in the oil fields and the handicap of National Oil Spill Detection and Response Agency (NOSDRA) in terms of facilities one would have expected this agency to be well resourced. A well equipped NOSDRA would be better positioned to independently detect and respond to oil spills rather than depending on the polluting oil companies.

There is nothing in the budget submission for vital equipment such as boats or helicopters that could facilitate monitoring in the creeks as well as offshore. We recommend that the NASS trims down the huge departmental subheads and properly equip this agency and others that are sorely needed to curtail reckless pollution and degradation of our environment.

It would be helpful to better fund the National Environmental Standards and Regulations Enforcement Agency (NESREA) as well as the National Parks and the restoration of our wetlands, including the highly degraded Nguru Wetland.

Considering that we are on a limited time budget at this consultation, permit me to end this short submission by requesting that the NASS publishes details of its expenditure and also to review the controversial Constituency Projects concept as these projects can easily be taken care of by the various ministries and agencies.