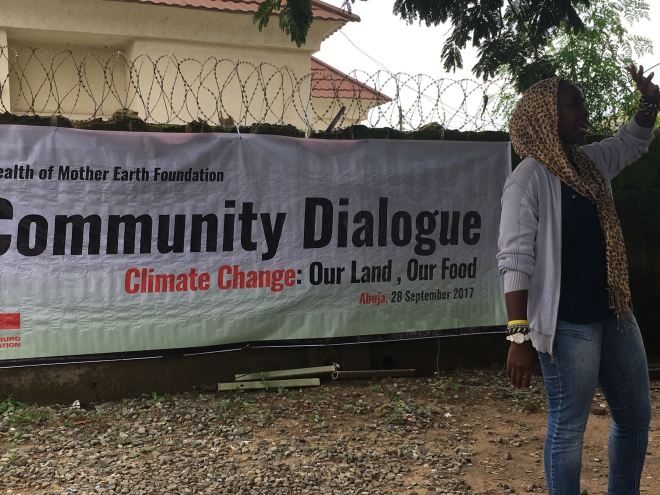 Soil quality has direct impact on the quality of harvests. Poor soils produce poor yields and climate change affects the quality and availability of soil for food production. We experience this directly when there are floods or droughts. The increasing desertification in Nigeria can be attributed in part to climate change. Poor soil management is equally responsible for incidents of desertification that is sometimes erroneously described as the “southward march” of the Sahara Desert.

Global warming is already having impacts on farming and food supply across the world. Projections for food supply if global warming trends are not reversed, or at least slowed down, are quite worrisome. We are witnesses of the impact of floods on farmers and farming in Nigeria this year, 2017. We cannot forget what flooding has meant in the recent past. In the 2012 floods, 6 million Nigerians were displaced and  over 300 deaths were recorded. More than 100,000 persons were displaced by flooding in Benue State alone in 2017. Several deaths have also been recorded this year as a result of floods in Lagos and Borno States and other parts of Nigeria.

Without argument, change of rainfall patterns and volumes have direct impact on agriculture, including herding activities. Climate change has effects on access to land, as well as water, for cultivation and for pastoral activities. The effects can also contribute to conflicts arising from the shrinking of these and related resources. Drier lands contribute to migration or displacement of populations. The same happens with flooding or coastal erosion. Pastoralists and farmers can work in ways that are mutually beneficial rather than in the current conflict-ridden ways. With herders and farmers gathered in this dialogue today, we have opportunity to share concerns and build solutions.

Degraded land sometimes get labeled as marginal lands thus setting them up to be grabbed and taken away from communities. Global warming may lead to an increase of pests, diseases and post harvest losses. Even small increases of temperature will negatively impact the production of cereals such as maize. In addition, unusual weather variability coupled with extreme weather events also lead to:

Sustainable Development Goal (SDG) 2 sets the important target of achieving Zero hunger by 2030. If conscientiously pursued the world would drastically reduce the impacts of global warming on food production. Specifically, among other things, this important SDG seeks to:

The target of Zero Hunger by 2030 may seem impossible to attain in the face of climate change, but with suitable approaches and intensive extension services, food supplies can be sustained and farming can help to cool the earth rather than accelerate Global warming. The sort of farming that would do this would enrich soils rather than degrading poisoning them. They would protect soil organisms rather then killing them. This farming method would be agroecological, and deeply climate and culture smart. Culture smart farming works with the best indigenous knowledge and technologies and protect crop varieties. Such indigenous technologies include the zai method used by farmers in Burkina Faso and others to retain water and nutrients and thus maintain and enrich soil quality and thus protect biodiversity.

Culture smart and climate resilient farming are contrary to what is offered by modern biotechnology by way of genetically modified organisms (GMOs). When GMOs are presented as being climate smart, there is a willful denial of the massive erosion of species that they represent. There is also a willful denial of the soil degradation by the agrotoxics that are applied in such farms.

Today, we are fortunate to have in our midst a pastoralist from Turkana Region of Kenya. She works with pastoralists and fishermen and women whose livelihoods depend on the predictability of weather patterns. She comes with a rich experience of what it means to raise livestock in a semi arid area and in a region that has both internal conflicts as well as the challenges of oil extraction. Her region in Kenya faces the combined challenges of climate change and oil extraction impacts.

Our hope is that through our dialogue, we will share experiences and pick out lessons that will help us manage our lands better, avoid or resolve conflicts and equally extend the lessons to those who couldn’t be a path of this Dialogue.

Permit me to now step aside and invite Ikal Angelei to take the floor and set the Dialogue rolling.