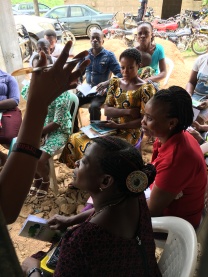 Building a Resilient and Ecologically Engaged Citizenry. Cross River State is generally seen as a green state, with some of the last tracts of pristine rain forests – some of which have been preserved through community forest management efforts. Some of us believe that what the State needs is an economy creatively built on her bio-economic endowment. Such an approach would release the creative potentials of the citizens in an inclusive manner with inbuilt resilience. The rich soils and biodiversity of the State have however become a compelling pull for plantation or monoculture developers. Their incursions have put pressure on the local communities, especially the forest dependent ones. The incursions also have grave implications for national and global efforts to tackle global warming.

The suggestion that plantations are forests has been rejected by our peoples who insist that forests are biodiversity hotspots and that there can be no mono-cultures without the destruction of biodiversity. Biodiversity erosion degrades the resilience of communities at many levels – ecological, spiritual, economic, social and cultural. Biodiversity destruction can come from many actions including land use changes arising from conversion of forests into plantations as well as from infrastructural projects.

The controversies surrounding the Superhighway project idea have been consistently on rather basic premises. While some ask to know what would be exported at the Sea Port where the highway is to begin, others ask to know if the imported goods would terminate at Katsina Ala or where else they would go and how. These questions skirt the issue of the prime reasons offered for the Superhighway project – the urgent need to open up the State to investors and for development. The clouds over the project have been sustained by the lack of adequate public consultations on the routing of the highway, its necessity, its finance and viability and the trade-offs with regard to the massive community displacements and biodiversity destruction that would accompany it. Non governmental organisations (NGOs) like GREENCODE and Peace Point Action (PPA) have proposed that a railway system would be more cost effective in conveying goods from the seaport to the hinterland, besides having less impact on the environment.

These concerns have led communities and other citizens to demand a transparent Environmental Impact Assessment (EIA) process. That process has been unexpectedly tortuous for the Cross River State government (CRSG) because consultants engaged to help prepare the documents could not know, as pointed out by Rainforest Resource and Development Centre (RRDC), that there are no Chinese alligators, blue monkeys or even dams that would be found on the proposed Superhighway route. The versions so far seen appear to be cut-and-paste documents with scant relevance to the localities to be traversed by the Superhighway.

The CRSG has struggled to listen to public complaints and has reversed itself on the astonishing move it had made to grab 10km on either side of the proposed superhighway in order to create what had been described as a “development corridor”. That land uptake would have grabbed 25 percent of the landmass of the state and displaced up to 180 communities in the process.  Secondly, the CRSG is said to have realigned the superhighway so that it doesn’t traverse forest reserves. The problem with this is that with the route still falls within the fringes of forest buffer zones, the threats of illegal logging and opportunistic poaching remain very high.

Unfortunately, the CRSG has not been able to build the confidence of the public on the gains that the changes could have brought. This situation arises from the fact that while renouncing its initial edict to grab 10km on either side of the Superhighway, as well as sending out signals that the routing has been reconsidered, there have been threats and ultimatums made to the effect that the CRSG would proceed with the project even if the requirements of the law are not met; that they would consider revoking the ownership of the Cross River National Park. Moreover, the new routing of the proposed realignment of the Superhighway is still a conjecture as the revised map is not in the public view. The only maps that are accessible are those produced by the Wildlife Conservation Society (WCS). This speaks volumes about the preparedness of the State for the prosecution of this project in a way that addresses the concerns of the people and the unassailable need to protect our ecological heritage.

Today we are gathered here in Akpabuyo for a diagnostic Community Dialogue on the state of the local environment. We will examine issues including threats to our biodiversity and livelihoods. We will also examine what steps can be taken to preserve and enhance local livelihoods especially under the canopy of our reconnecting with nature, discussing re-source democracy and examining how to promote positive changes in the communities while minimising those with negative impacts. The purpose of our engagement today is to facilitate a process of distilling existing knowledge and bringing out action points that would build an ecologically engaged, resilient and proactive citizenry.

Our series of dialogues cover many ecological zones and have been supported by hosting communities, SGP-GEF of the United Nations Development Programme, Rosa Luxemburg Stiftung and Grassroots International. We thank leaders of Akpabuyo Community for making our dialogue today possible. We are also grateful to all the civil society groups and the media that are with us on this ecological journey.

We are only as resilient as our environment is. Let the dialogue continue.

Welcome words by Nnimmo Bassey, Director of Health of Mother Earth Foundation (HOMEF), at the Community Diagnostic Dialogue on the theme Building Resilience for Resistance held at Akpabuyo, Cross River State on 30th May 2017