The COP is an interesting space where climate criminals prowl about in well cut suits dripping with blood. Of course the COP means two key things: Conference of Polluters and more importantly, Conference of Procrastinators. A really toxic combination. When they tell you that CCS means carbon capture and storage do not believe them. Any location stipulated for such activities are actually Climate Crime Scenes. Just like every mine pit or oil well are.

Polluters and their lobbyists hold the keys that insert brackets and other spanners in the works to ensure that real climate actions do not take place. While the toxic output of these polluters pile up profits in bank vaults and stock exchanges, they do all they can to to hide the piles of bodies of children, men and women incapacitated or murdered by their poisons.

Today we are gathered to present badges of dishonour to the leading corporations who have stayed the path of resource corruption and have done the most to earn the recognition for setting the planet on the road to incineration.

The year 2015 is significant in the history of climate inaction. It marks a moment that may be lost if all that world leaders can do is to draw up a chart of intentions and make no commitments to radically cut emissions. The procrastinators are already sliding down the road that would see their intentions coming into force by 2030. By 2030? Really? A full 25 years down the road. The same number of years required to clean up the waters of Ogoniland, Niger Delta, of Shell’s toxic oil spills and other wastes.

And do not forget that a climate cabal had also said that fossil fuels will be phased out by the end of the century. By that time all these decision makers would have turned into fossils, but unfortunately not sufficiently so to provide fuel! So, with these post-dated actions, the future is toasted, fried, scrambled and roasted. All for the sake of corporate profits. All at the expense of the planet and of peoples. There is a climate mafia on the prowl!

Today we are gathered to present badges of dishonour to the leading corporations who have stayed the path of resource corruption and have done the most to earn the recognition for setting the planet on the road to incineration.

We urge these corporations to be proud of their achievement, because they have very clearly gone beyond the limits of what would be humanly and morally conceivable. These are awards for reprehensible environmental, ecological, economic and social activities. These awards are given to highlight obnoxious corporations freely voted by citizens of the world in recognition of their social bankruptcy. 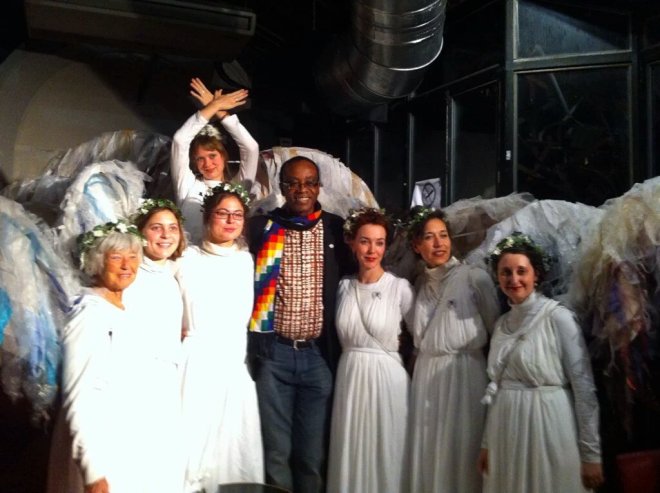 Climate Angels took the climate crooks to the clouds!

The COP provides the best backdrop for these Pinocchio Awards, because you cannot imagine any other space where billions of dollars have been sunk or a space where leaders of nations, that annually collectively spend over a trillion of dollars on military adventures, gather for backslappings and and yet dither when it comes to raising token money to throw a life line to sinking Small Island States and other vulnerable nations and territories that are victims of climate change.

We urge all winners to wear their badges of dishonour with pride and quickly strut into the raised fists of abused peoples who will no longer stand aside and see their future bastardised. Today we roll out the drums in register knocks on these Kings of Infamy, these liars extraordinaire.